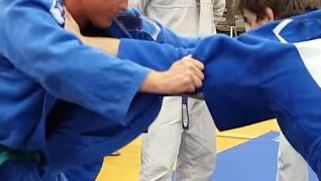 One of the things beginners have most difficulty with is the "stiff arm", a tactic some players (usually another beginner) will sometimes use to block their opponents from entering into their technique.

It's quite effective if you're dealing with someone who is not experienced. They just don't know how to get past the stiff arm.

One way to deal with a stiff arm is to break uke's grip and before he can stiff arm you again, you pull him in and impose a dominant grip on him.

But you don't actually have to bother to go through all that. You can actually make good use of his stiff-arming tactics and attack him with techniques that will get past his stiff arm.

There are many techniques that will not work against a stiff arm, such as uchimata, osoto-gari, tai-otoshi, ouchi-gari and kouchi-gari. However, there are some techniques that are perfect for throwing a stiff-armer.

Soto-makikomi is the most obvious one. Uke has his arm outstretched and locked at the elbow like a wooden pole — just perfect for you to clamp on with your arm and do a soto-makikomi.

Another very good throw for use against a stiff arm is drop ippon-seoi-nage. He'll be able to stop a standing version with his stiff arm but if you were to suddenly drop underneath him, he'll collapse on top of you and you can just roll him over for ippon (or at least waza-ari).

Actually, any kind of throw that involves a dropping action will work against the stiff arm. Tomoe-nage (and especially yoko-tomoe-nage) is a good one. He can stiff arm all he likes; if you suddenly drop underneath him, he'll go flying.