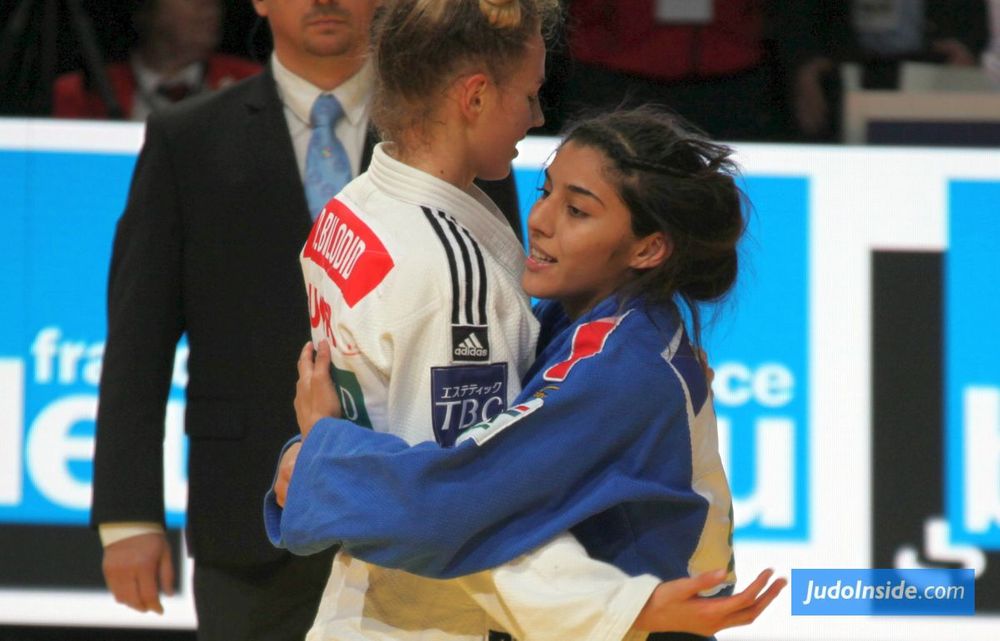 Usually, players in the same weight category are the same size but occasionally there is a big difference in height.

A shorter player has three gripping options when facing a taller player:

a) Become a spoiler and pin down the taller player's leading arm. Once you nullify that arm, it's hard for that taller player to do any techniques. But being a spoiler means you also don't have the grip that you want so it won't be easy for you to do a throw either.

b) Get an underarm grip and do a drop technique underneath the taller player. Drop seoi, drop sode and yoko-tomoe-nage are ideal.

c) Give the taller player a taste of his own medicine and impose a strong grip with your leading arm. Pull uke's head down if you can. Whatever you do, don't let them dominate. This will require a lot of exertion so you have to be fit to adopt this approach. If uke is being dominated your heavy gripping, he won't be able to do his favorite techniques properly.

For option (a), you need to be good at newaza or making uke look passive (and force three shido penalties on them) because you won't be able to throw either.

Option (b) is the best. You are on the offensive here and making full use of the height differential to drop right underneath uke to throw them over. This is the best option for a shorter player.

Option (c) is a bit risky unless you have the strength and fitness to do this for as long as it takes to defeat uke. It might stretch through the four minutes of regular time and go into Golden Score. This was the tactic used by France's Shirine Boukli in her 2020 Paris Grand Slam semi-final match against double World Champion Daria Bilodid of Ukraine. Though considerably shorter than her Ukrainean opponent, Boukli was able to impose her grip and throw Bilodid several times (each time very close to scoring). Bilodid had difficulty doing her usual judo because of the gripping tactics of Boukli and was in danger of getting her third shido. It was only in Golden Score that Bilodid managed to do a twitch kosoto that felled the French player.

If you are shorter than average and your opponents are usually taller than you, you should definitely develop some drop techniques and go for Option (b). If you're fit and strong, you can go for Option (c) but this is very, very tiring. The last option is (a) which you should adopt when you feel you can't throw the taller player anyway, so you might as well spoil their chances of throwing you (the win would have to come from newaza or disqualification from penalties).