Judo Concepts, Lesson 17: How to randori with beginners 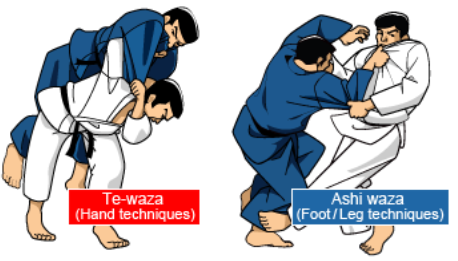 There are many judo clubs where beginners are not allowed to do randori until they've been doing breakfalls for months. But that's not what I experienced. At my first judo club, at the University of Texas in Austin, I was exposed to randori from Day 1.

People who've trained at KL Judo Centre know that that we allow beginners to do randori on their first day at the club. Of course we take precaution to pair them up with experienced players, who know how to take care of them. But yeah, we get them playing judo from the start.

We're all products of our upbringing. My judo upbringing was that if you join judo, you should get to play judo straight away. This is true of every other sport I've done. If you join a badminton club, you play badminton on your first day. You'll be bad at it, of course, but you'll get to play. There's no such thing as waiting around for months before you start playing the sport.

In anticipation of some readers' response: But badminton is not a full contact sport! How about American football? Or Rugby? Or collegiate wrestling? Are those full contact enough for you? I've played them all an in every single case, I was playing the sport from Day 1. If I'd been force to do drills for months before I was allowed to play, I would have given up.

So, our philosophy is if someone joins our club to play judo, we let them play judo. But as I mentioned earlier, we pair them up with experienced players who have good control, and can take care of them.

In my experience, I've detected four distinct ways in which advanced players randori with beginners, two of which I disapprove of, and two which I think are good.

First off, the two approaches that I dislike:

Approach #1: Go soft on the beginner and let him throw you about.
This is no use. It gives the beginner a false sense of what judo randori is all about. If you want them to get the feeling of throwing, there's always nagekomi and even moving nagekomi. You can let them throw you then. But randori should be randori. There should be some resistance and the threat of being thrown.

Even if the beginner has no clue what to do, they have natural instincts and will try to wrestle you to the ground, if given a chance. So, don't stop them from trying. Don't correct them just as they are in the midst of trying to do something. Let them try (and fail).

There is a time to teach and there is a time to spar. Don't use sparring time to teach. If you really feel there are some things you need to point out to them, bite your tongue and wait until the randori is over. Pull them aside and say, "Hey, I wanna show you something". But don't do it mid-randori. That's just obnoxious.

Okay, now onto the two approaches I think are acceptable. These two approaches so happen to be based on what I experienced on my first day doing judo at the University of Texas. There were many seniors there. Some big, some small. The smallest guy was a Frenchman named Dominique. There was also a medium-sized American guy named Brendan. Both were black belts.

After the beginners were taught some basic break-falls and rolls, the seniors demonstrated some techniques, and before the session ended, we were invited to do some randori with the seniors.

Dominique (who represents Approach #3) took a traditional sleeve lapel grip, dance around a bit and launched me into the air with a perfect morote-seoi-nage. I landed flat on my back. Surprisingly, it didn't hurt, such was his excellent control over my descent. I got up, did my best stiff arm defense, and promptly got flung through the air once again. And again and again and again. I must have been thrown with morote-seoi-nage five or six times before the coach yelled, "matte".

I sat out a while and then went on with Brendan (who represents Approach #4). He was a bit bigger than I, so he could have easily used some big power techniques like osoto-gari or uchimata but he didn't. Instead, he foot-swept me. And like Dominique, he was able to do this over and over again. It was an ashiwaza masterclass. He threw me five or six times with a mixture of ashi-barai, kosoto-gari, sasae, hiza-guruma and kouchi-gari. Not once did he use a "big" technique. All these were small, subtle techniques that nevertheless completely floored me.

That experience with Dominique and Brendan left a lasting impression on me. That's why I still remember what happened so vividly. It demonstrated to me that it was possible for an absolute beginner to do randori without getting injured. I felt completely safe sparring with those guys and even though I must have been thrown a dozen times, there was no injuries and I don't even recall it hurting much.

Those who know me will know that that when it comes to beginners, I adopt the Brendan style, which is to use ashiwaza. This is not to say that I think Dominique's approach is wrong. But there are two key reasons why I think the Brendan approach is better.

The first reason is practical in nature. I just find it easier to control uke's fall if it's ashiwaza. The second reason is more strategic. I think it will intrigue the beginner more if they get felled by a slick foot sweep rather than a big seoi-nage (which incidentally is my favorite technique).

Whether it's the Brendan approach or the Dominique approach, I think it's good for beginners to do randori. When someone joins a sport, they deserve the right to play that sport. Our job is to facilitate that in a safe way.

Judo Concepts, Lesson 18: 3 types of partners to randori with →