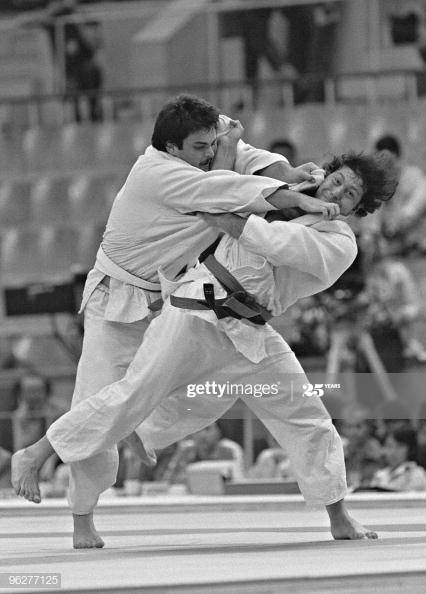 When I was training as a competitor, I was shown video recordings of two matches that were extreme examples of players who refused to come to grips. One involved Toshihiko Koga from Japan when he was fighting in his first Olympics. He was up against a South Korean who spent the whole match just grip fighting. The other involved Neil Adams in one of the European Championships where his opponent also spent the entire match just grip fighting.

What can you do when you meet an opponent who has simply decided that his game plan is to spoil the fight and refuse to come to grips with you? The approach Koga and Adams took was to grip fight back, so those matches ended up being just a battle of grips. In Koga's case, he managed to slip in a footsweep so he won by a small score. With Adams, I think it was settled by penalties, in favor of him.

Angelo Parisi (AFP via Getty Images)
So, you can give the spoiler a taste of his own medicine and grip-fight him back. But there is another way, which is to not grip fight at all and to let your opponent take the first grip.

Once he does that, he can't avoid you anymore and you can get your grip. The great Olympic Champion Angelo Parisi of France (left) is said to prefer using this approach.

The only question then is, can you go on to dominate your opponent with your grip?

(See Lesson 2 and Lesson 3 to understand how to get into a dominant position once both parties have secured their grips).

It must be said that this is a risky move, letting your opponent grip first, because if he is a strong player, once he secures his grip, he will proceed to dominate you (again, see Lesson 2 and Lesson 3 for a thorough discussion on how that works) all the way. So, only use this approach if you are very confident that you can dominate your opponent once the both of you come to grips with each other.