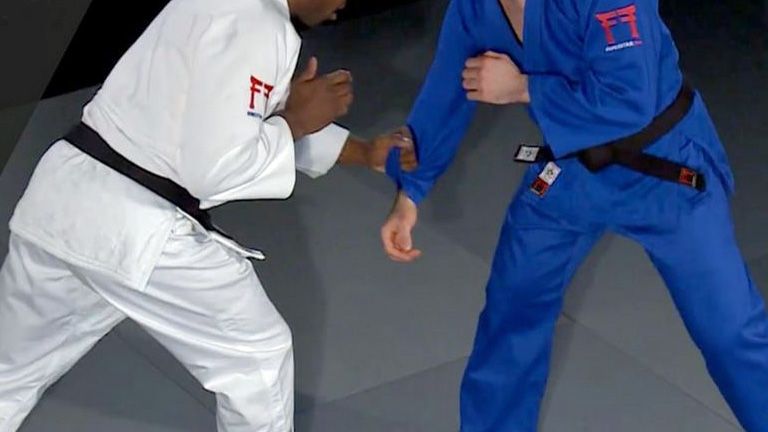 One misconception some players have about grip-fighting is that it's all about breaking your opponent's grip. While breaking the grip is part of grip-fighting, it's only part of it, and it's a means to an end. So, what's the end, then? It's to get a strong, dominant grip on your opponent so that you can do your techniques.

When I was taught the four basic rules of gripping, it was a time when gripping rules were a lot more lax. You were allowed to use two hands to break a grip, you had more time to play with when adopting unorthodox grips and covering your own lapel to prevent uke from getting a grip was permissible. It was a very different time (not necessarily a better time but different).

These days, IJF rules on gripping are a lot stricter so I've adjusted the four basic rules of gripping accordingly. But the basic principles are the same:

Never allow your opponent to get a usable grip
Note the word "usable". If uke likes to take a right-handed, underarm grip on your left lapel, that is a usable grip for him. Never let him get that or he will throw you. So, what's the definition of a non-usable grip? It's whatever grip that is pretty useless to uke. For example for the uke who likes a right-handed, underarm grip, a left-handed grip of any kind might be a non-usable grip (unless he has trained to throw left-handed). But it doesn't even have to go that far. A right-handed overarm grip might be enough of a non-usable grip for uke (who prefers a right-handed, underarm grip) that you can effectively thwart his throws. Basically, if you know your opponent well, and you know what grip he likes, prevent him from getting that grip. If he gets some other grip that he can't really use, that's fine. If you're up against a new uke whom you are not familiar with, you have to quickly suss him out and figure out what his preferred grip is. It's not that difficult. It'll be whatever he goes for after the referee says "Hajime". Whatever grip he likes, don't let him get it!

If your opponent is able to get a usable grip, break it immediately
Sometimes, uke manages to get the grip he wants faster than you expect. Once you realize he has managed to get the grip he likes, you have to break it off immediately. There are various legal ways to break a grip, which I will share in a future lesson. But for now, just remember, you cannot let uke maintain a usable grip because with his favorite grip in hand, he will be able to to throw you.

If you are not able to break his usable grip, attack him
Remember, once uke has a usable grip, he's in a good position to throw you. If you cannot break his grip (let's say his grip strength is exceptional), the only recourse you have is to attack him. When you attack him he has to defend or try to counter. He cannot focus on throwing you anymore if he's under attack. Of course, you might not be in a great position to do a good throw. That's okay. All you need is a good enough throw that will convince the referee you're doing a legitimate throwing attempt. You don't want to get a shido, of course, so don't do a false attack. But understand that your legitimate attack doesn't have to score. Your main purpose of doing that attack is to prevent him from throwing you.

If you are not able to attack him, prepare to counter his attack
Although it's possible to do a legitimate attack from a less-than-ideal position, sometimes uke has got you gripped in such a tight lock that you really can't put in any move that doesn't look like a false attack. In such a situation, you need to prepare for the inevitable: uke's throwing attempt. What you need to do if you cannot launch a reasonable attack, is to switch to counter mode. Just because you cannot throw him with an offensive throw doesn't mean you can't throw him with a defensive one. This is called a counter. So, once you realize you're at Step 4 (it's already too late for Steps 1, 2 and 3), prepare yourself for the counter because the throwing attempt is sure to follow.

Having said all of the above, I need to reiterate that your main objective in a grip fight must always be to get the grip you want. Denying uke a grip is only a means to an end, which is to create a situation for you to get your usable grip.

If you incorporate the four basic rules of gripping into your game plan, it will be very hard for uke to throw you. But being a difficult player to throw is only part of the equation for winning. You can't just block his throws. You must also be able to do your throws. Remember, these four basic rules are a means to an end. I can't emphasize that enough.