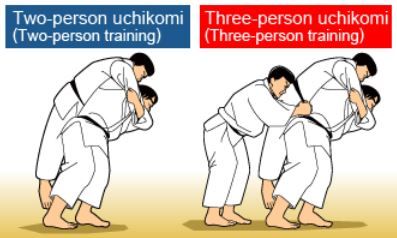 So, is uchikomi useful for developing good throwing skills? This question is similar to the one about kuzushi in that it requires a nuanced answer rather than a straightforward yes or no. As with kuzushi, context is important when it comes to uchikomi.

Two-person uchikomi is very important when you are learning how to do a throw for the first time. If you have no clue how to enter into a particular technique, uchikomi is a very useful way to facilitate learning.

Two-person uchikomi is, however, pretty useless once you've mastered a throw. I say "pretty" useless rather than "completely" useless because it's okay as a warm-up drill before class starts. But it does nothing to improve throwing skills that you've already mastered.

For example, I know how to do ippon-seoi-nage. If I want to sharpen my seoi-nage, I won't do uchikomi. I might do nagekomi because that one takes me through the whole motion of throwing, so there is some benefit there. But mainly, I will try to do lots of seoi-nage in randori.

My training partners all know I do seoi-nage so it's not easy for me to get an entry into that throw. I have to be really sharp and use all kinds of gripping and diversionary tactics to create an opening for it. That's how I improve a technique that I already know how to do.

So, to recap: Is uchikomi useful? Yes, two-person uchikomi is useful when you're learning a new throw. No, it's not very useful, except as a warm up exercise, if you already know that throw well. And three-person uchikomi is good for developing pulling strength.

Judo Concepts, Lesson 11: To Stretch or Not to Stretch? →