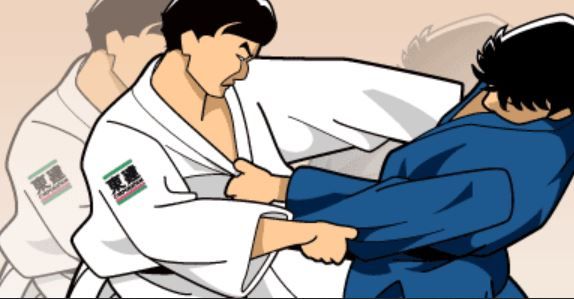 Do you believe in feng shui? Well, it depends what you mean by that term. According to Wikipedia feng shui (風水) is a traditional practice originating from ancient China, which claims to use energy forces to harmonize individuals with their surrounding environment. Feng shui, Wikipedia notes, is considered to be pseudo-scientific.

In other words, it's hocus-pocus stuff.

If that's what you mean by feng shui, of course I don't believe in it. But if feng shui is just a fancy phrase for "good interior design", yes, I'd want that for my office and my home.

So, in like fashion, do I believe kuzushi is necessary in order to throw an opponent? You would think the answer would be an obvious yes, but this question requires a more nuanced answer.

First of all, let's define what kuzushi means in the context of judo. Usually, it's translated as "unbalancing" your opponent. But that's not all. It's not just the act of unbalancing uke. There's also a timing element tied to the act of kuzushi. According to classical (or traditional) judo teaching, kuzushi has to happen before tsukuri, which is when you enter into the technique.

While I obviously believe that you'll need to unbalance uke in order to throw him, I don't believe that it happens before tsukuri. Why do I say so? Because I've watched thousands (actually make that, tens of thousands) of hours of competition video and I've noticed that nobody does kuzushi the classical way (that is, kuzushi before tsukuri). That only happens in demonstrations, never in competitions.

So what happens in competition? Answer: Kuzushi and tsukuri happen at the same time.

Don't believe me? Watch any clips of Toshihiko Koga doing his famous standing ippon-seoi-nage. He doesn't pull uke forward onto his tippy toes before entering into the technique. He pulls uke forwards and upwards (unbalancing him) as he enters into the technique. In other words, kuzushi and tsukuri happen at the same time.

Even the Japanese themselves don't attempt to do kuzushi the classical way (i.e. before tsukuri). Why not though?

There are two reasons. Firstly, even if it were possible to adequately unbalance uke before you enter into the attack, this is not something you would want to do because uke will react accordingly and defend against your throw. If you pull uke forward, for example, he would know that you are aiming for a forward attack. If you push him backward, he will know you're about to do a backward attack. Why notify uke what you're about to do?

In any event, it's impossible to achieve the kind of kuzushi that you see done in demonstrations, in a competition situation. Both players will be grip-fighting fiercely: pulling, pushing, moving, breaking grips, blocking and so on. Good luck trying to position uke onto his tippy toes before entering into a seoi-nage. It's just not going to happen.

So, what's the implication of this? The main thing is to not worry about achieving kuzushi. Just focus on tsukuri. If you get your tsukuri right, the kuzushi will happen.

If you're going to do standing ippon-seoi-nage ala Koga, practice entering into the technique with split legs. Pull and lift uke (forward and upward) as you turn into the technique. By the time you've made the full turn, uke would have already become unbalanced and loaded onto your back.

So, get your tsukuri right and everything else will fall into place.